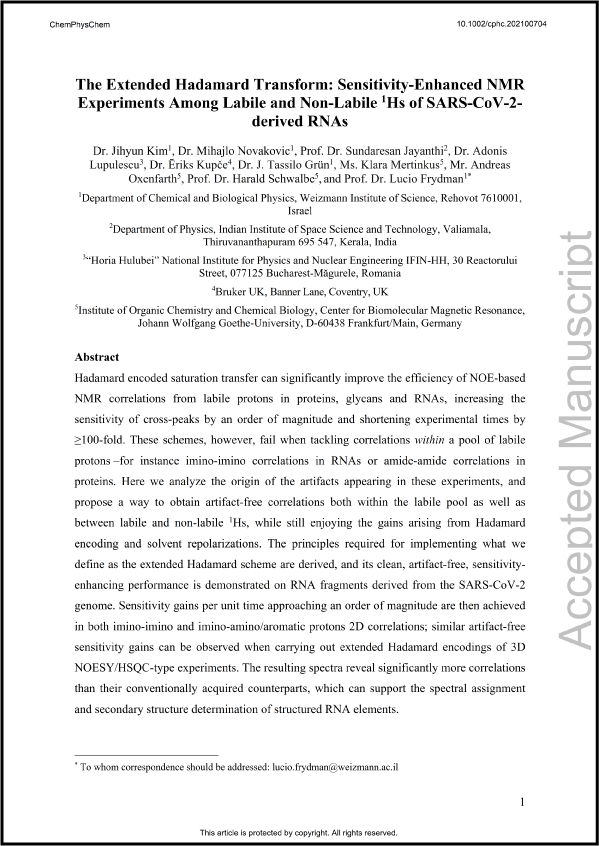 Hadamard encoded saturation transfer can significantly improve the efficiency of NOE-based NMR correlations from labile protons in proteins, glycans and RNAs, increasing the sensitivity of cross-peaks by an order of magnitude and shortening experimental times by ≥100-fold. These schemes, however, fail when tackling correlations within a pool of labile protons –for instance imino-imino correlations in RNAs or amide-amide correlations in proteins. Here we analyze the origin of the artifacts appearing in these experiments, and propose a way to obtain artifact-free correlations both within the labile pool as well as between labile and non-labile 1 Hs, while still enjoying the gains arising from Hadamard encoding and solvent repolarizations. The principles required for implementing what we define as the extended Hadamard scheme are derived, and its clean, artifact-free, sensitivity-enhancing performance is demonstrated on RNA fragments derived from the SARS-CoV-2 genome. Sensitivity gains per unit time approaching an order of magnitude are then achieved in both imino-imino and imino-amino/aromatic protons 2D correlations; similar artifact-free sensitivity gains can be observed when carrying out extended Hadamard encodings of 3D NOESY/HSQC-type experiments. The resulting spectra reveal significantly more correlations than their conventionally acquired counterparts, which can support the spectral assignment and secondary structure determination of structured RNA elements.