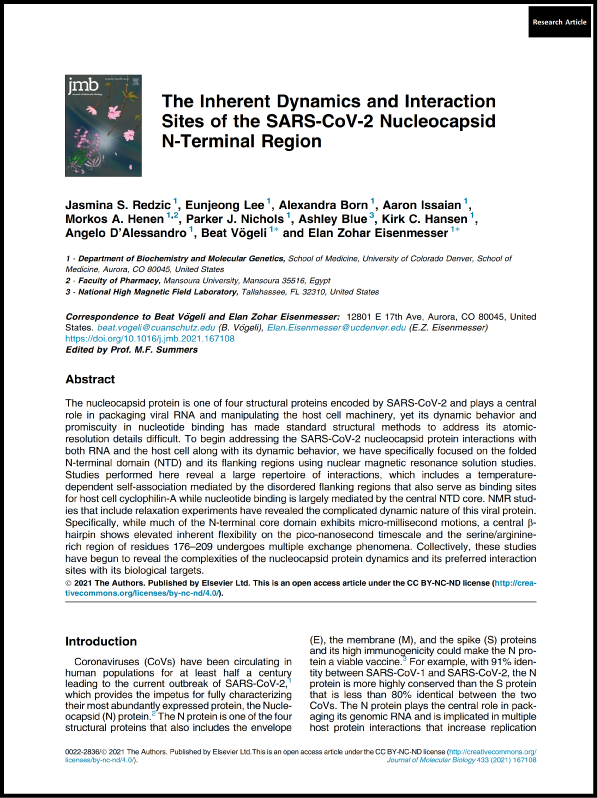 The nucleocapsid protein is one of four structural proteins encoded by SARS-CoV-2 and plays a central role in packaging viral RNA and manipulating the host cell machinery, yet its dynamic behavior and promiscuity in nucleotide binding has made standard structural methods to address its atomic-resolution details difficult. To begin addressing the SARS-CoV-2 nucleocapsid protein interactions with both RNA and the host cell along with its dynamic behavior, we have specifically focused on the folded N-terminal domain (NTD) and its flanking regions using nuclear magnetic resonance solution studies. Studies performed here reveal a large repertoire of interactions, which includes a temperature-dependent self-association mediated by the disordered flanking regions that also serve as binding sites for host cell cyclophilin-A while nucleotide binding is largely mediated by the central NTD core. NMR studies that include relaxation experiments have revealed the complicated dynamic nature of this viral protein. Specifically, while much of the N-terminal core domain exhibits micro-millisecond motions, a central β-hairpin shows elevated inherent flexibility on the pico-nanosecond timescale and the serine/arginine-rich region of residues 176-209 undergoes multiple exchange phenomena. Collectively, these studies have begun to reveal the complexities of the nucleocapsid protein dynamics and its preferred interaction sites with its biological targets.