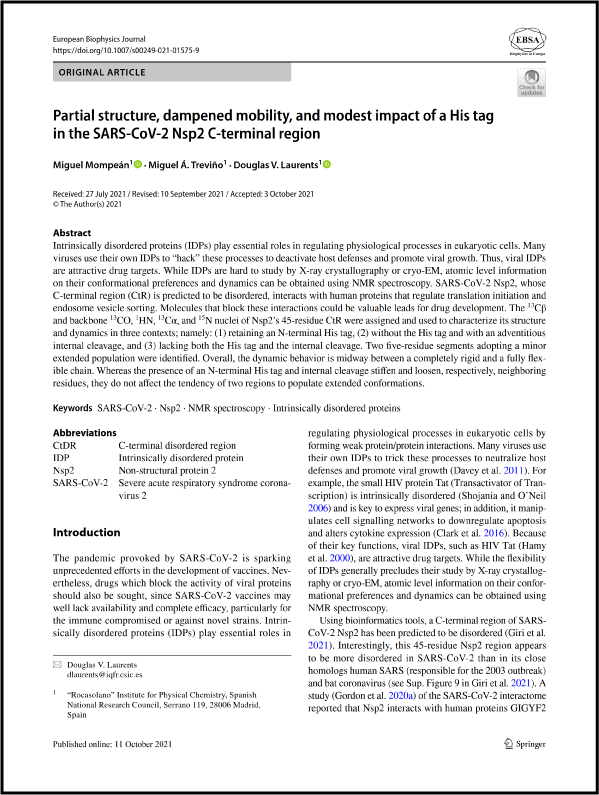 Partial structure, dampened mobility, and modest impact of a His tag in the SARS‑CoV‑2 Nsp2 C‑terminal region

Intrinsically disordered proteins (IDPs) play essential roles in regulating physiological processes in eukaryotic cells. Many viruses use their own IDPs to “hack” these processes to deactivate host defenses and promote viral growth. Thus, viral IDPs are attractive drug targets. While IDPs are hard to study by X-ray crystallography or cryo-EM, atomic level information on their conformational preferences and dynamics can be obtained using NMR spectroscopy. SARS-CoV-2 Nsp2, whose C-terminal region (CtR) is predicted to be disordered, interacts with human proteins that regulate translation initiation and endosome vesicle sorting. Molecules that block these interactions could be valuable leads for drug development. The 13Cβ and backbone 13CO, 1HN, 13Cα, and 15N nuclei of Nsp2’s 45-residue CtR were assigned and used to characterize its structure and dynamics in three contexts; namely: (1) retaining an N-terminal His tag, (2) without the His tag and with an adventitious internal cleavage, and (3) lacking both the His tag and the internal cleavage. Two five-residue segments adopting a minor extended population were identified. Overall, the dynamic behavior is midway between a completely rigid and a fully flexible chain. Whereas the presence of an N-terminal His tag and internal cleavage stiffen and loosen, respectively, neighboring residues, they do not affect the tendency of two regions to populate extended conformations.